For three decades, The Decorative Antiques & Textiles Fair has set the standard for antiques in interior design. It was the first in the UK to showcase a ‘look’ for decorating. This autumn, the fair is celebrating its 30th anniversary.

Changes to the Fair since its launch in 1985 have reflected wider trends in interior design: the traditional ‘country house’ revival of the 1980s; the growing interest in painted French and Scandinavian furniture (which was not available at other fairs), and, later in the 1990s, the Fair opened its doors to mid-twentieth century design classics at the demand of a new generation of younger buyers. The last ten years have seen a surge of interest in industrial and architectural salvage, rustic country antiques and mid-century modern.

The Fair’s embarrassment of riches spans decorative and painted furniture, Art Deco and post-war modern design, lighting (from 18th century rococo chandeliers to modernist 60s wall lights), mirrors, textiles, rugs and kilims, upholstered and leather furniture, garden and outdoor furniture and ornament, It also caters for collectors of 17th to 20th century antiques and objects. But many would argue that what makes The Decorative Antiques & Textiles Fair really special is the quirky and the unusual: its dealers have a great eye for spotting objects that work as decorative highlights in a home. 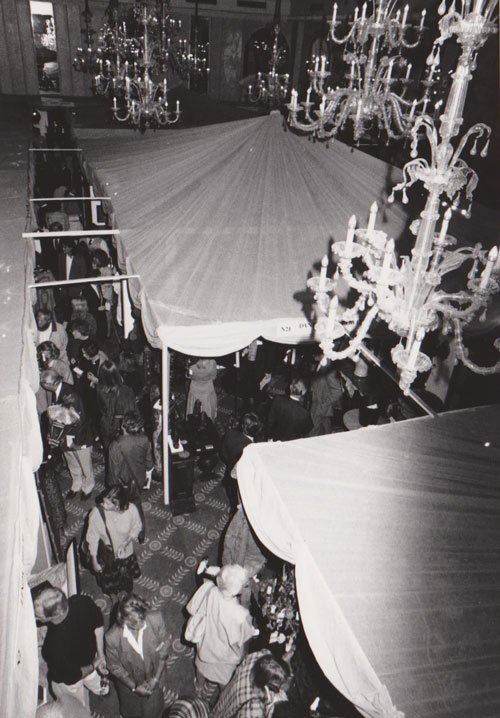 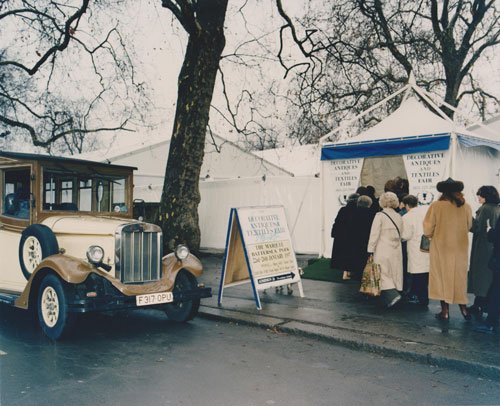 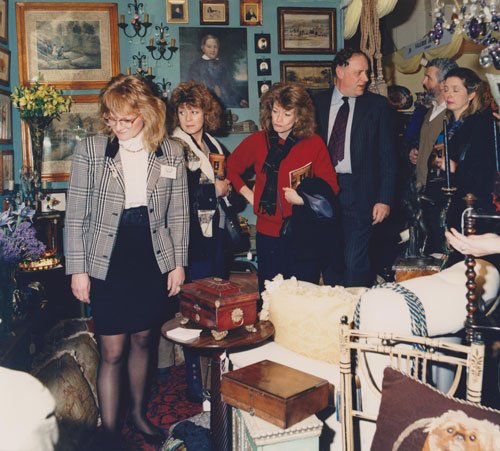 A very early fair at the Hotel Russell in 1989. Big hair, big shoulder pads, and a maximalist stand presentation! 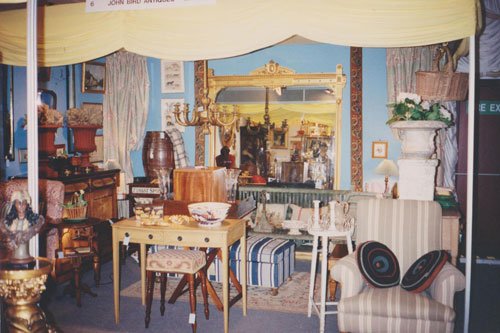 John Bird’s stand in the marquee at Chelsea Harbour, 1993 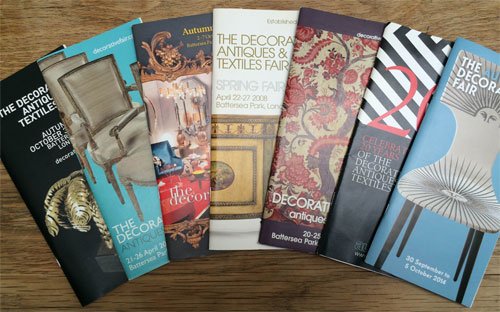 History of the Fair

Back in the 1980s, the design trade was looking for the more unusual sort of antiques that were rarely available at the major London antiques fairs, and Patricia Harvey, a dealer in decorative antiques, came up with the idea of giving decorators and designers everything they wanted under one roof.

The first-ever Decorative Antiques & Textiles Fair took place at London’s Kensington Hilton Hotel in September 1985.  Its marketing pitch – targeted at interior decorators and trade buyers – was something altogether new. There were 44 exhibitors selling fine and decorative antiques, textiles and art. None of the exhibitors specialised in post-war 20th century design. Most dealers at the time didn’t carry stock dating past 1930!

Amongst exhibitors were several dealers still trading today: Helen Linfield of Wakelin & Linfield, Joss Graham from his textile emporium at 10 Ecclestone Street (still his shop today), Robert Barley with ‘unusual decorative furniture and objects of all periods’, Robert Young, Jonathan Potter Ltd with antique maps and atlases (whose current shop in Marylebone is shortly moving to Bath), and Talisman Antiques.

In the introduction to the first catalogue,  Charles McCorquodale, author of The History of Interior Design (publ. 1983) said: “After the post-war period’s fascination with the ‘less is more’ aspects of avant-garde thinking on the domestic interior, the last decade has been distinguished by designers’ eagerness to evolve personal styles fluently combining old and new – a welcome eclecticism… adding to the impression that a room evolved with time and care rather than a few rapid visits to a department store.”

The Fair proved such a hit that a second annual edition was launched in March 1987, and ‘the Decorative’ soon became established on the international buyers’ map.  By September 1988 lots of private buyers were attending each event, as well as trade.

...to Regent St, Hammersmith and Chelsea…

The Fair moved to the Café Royal, then the Novotel in London W6,  then to a purpose-built marquee at Chelsea Harbour – a riverside industrial area being developed into apartments and shopping areas since the late 1980s and which was to become home to the Design Centre. It was the first time a major, central London fair had been held in a tent!

…to Battersea – its present home

Due to further development of the Chelsea Harbour site, another new home was found in September 1993 – the marquee moved to the grounds of King’s College, opposite the north end of Lots Road. After the difficult economic interlude of the early 1990s, the economy seemed on the up again: exhibitor numbers reached 100. By the end of 1997, the Kings College site was being converted to luxury apartments, and the Fair moved once more, taking its marquee to Battersea Park, beginning a new tradition for events in that location. By 1998 the fair featured 140 exhibitors, and had settled into the pattern of three Fairs each year in January, April and September.

In September 1999, the foyer featured a special roomset designed by Nicholas Haslam and Mark Humphrey which set out ‘to demonstrate how successfully both modern and antique pieces can be used together to stunning effect’. A few 20th century dealers began to exhibit, like Fiona McDonald (a regular at the Fair today) and Plinth.  These days, there are  several dozen specialist 2oth century dealers, and it’s quite the norm for decorators to pair, for example, an 18th century painted dresser a with a 20th century industrial table.

The Fairs are held in January, April and October. Over 140 dealers exhibit from the UK and Europe.

DOWN AT THE DEVOL CABIN