The RHS Chelsea Flower Show is the highlight of the gardening year. Every year the standard seems to get higher, and every year tickets sell out even earlier in advance. This year, we even had sunshine! If you’re not able to get there, here’s what inspired us… 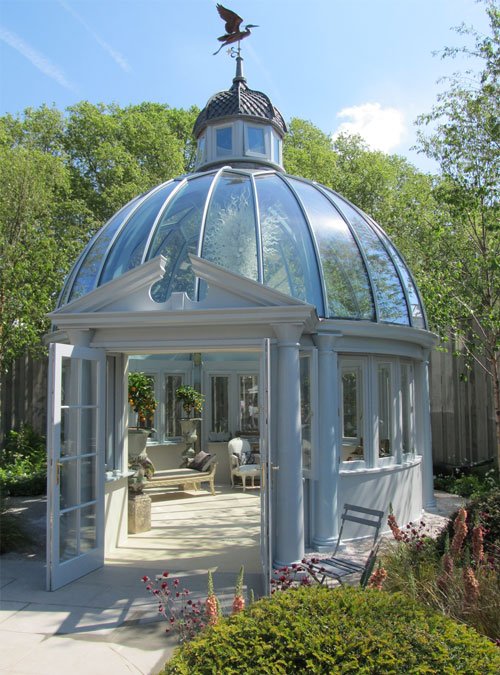 The The Khōra Dome, in steel and curved glass, is an imposing rotunda structure by British designer/engineer Louis Calmels. Measuring 5 metres in diameter, and 7 metres in height, it’s the ultimate “room with a 360⁰ view”! 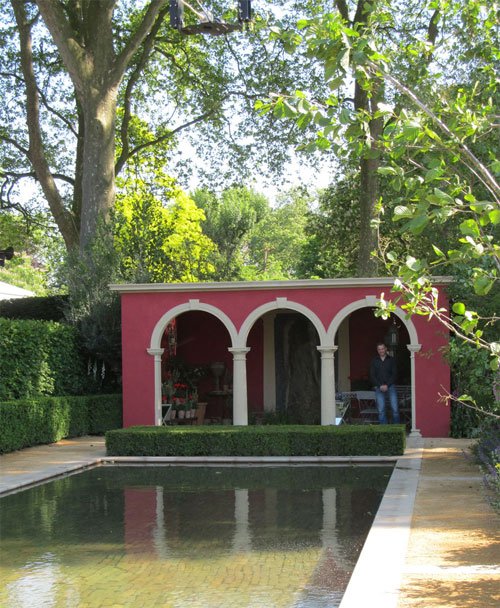 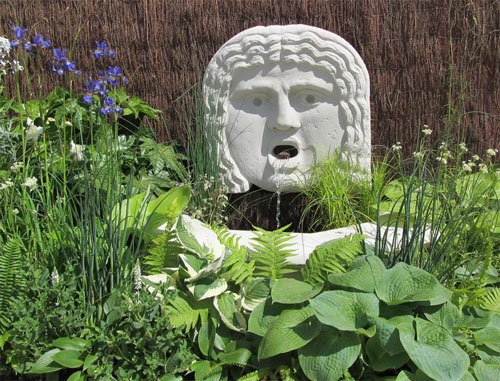 Haddonstone, leading designers of architectural stonework and garden ornaments, have launched a collection of replicas of works in the Sire John Soane Museum. This ‘Mouth of Truth Mask’ (chosen as Garden Products of the Year Finalist) is similar to the Bocca della Verita in Rome. 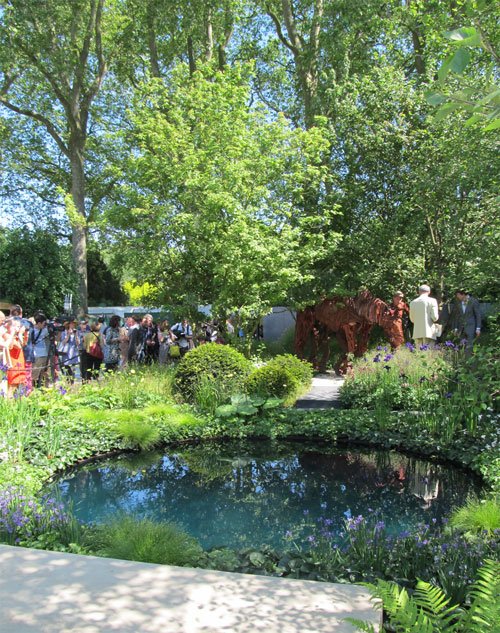 Designer Charlotte Rowe‘s ‘No Man’s Land’ Garden for ABF The Soldiers’ Charity to mark the centenary of World War One. Designed to be  a reference to the Western Front but also to reflect the state of mind many servicemen find themselves in when they leave the Army. The water basin represents the many deep circular mine craters that lie all over the Western Front and now have become peaceful havens for plants and wildlife. Stephen Fry (in the cream jacket) was on the stand with Joey the war-horse… 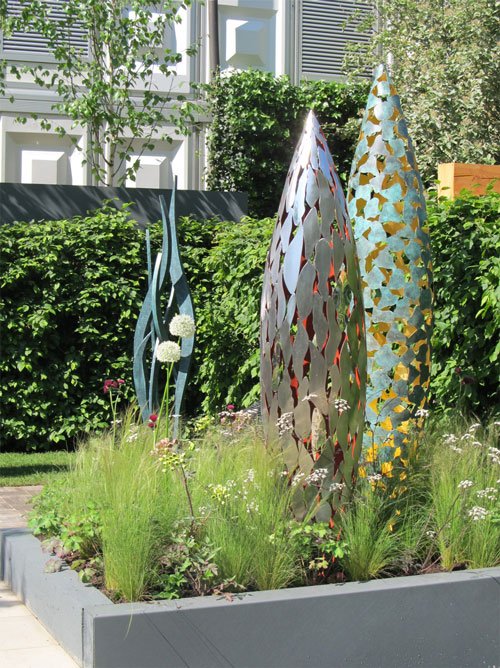 David Harber‘s stand, with two versions of the ‘Quill’ sculpture and in the background, ‘Hydra’ in a verdigris finish. 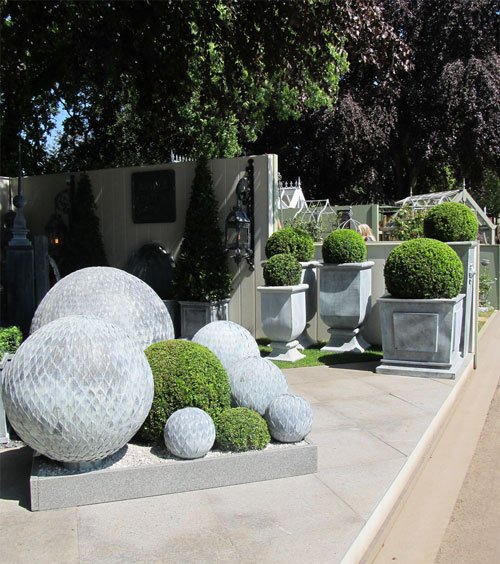 Elegant zinc planters and leaf balls from A Place in the Garden. 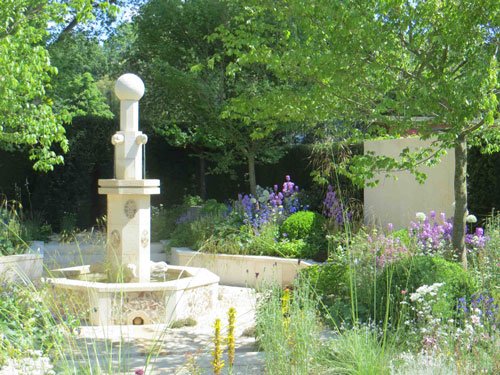 The M&G Garden is designer Cleve West’s version of a classic Persian garden of 1,000 years ago. The octagonal limestone fountain, along with all the paving and walling, and  the stone for the stunning Tree of Life carving has been supplied by Lichen Garden Antiques. 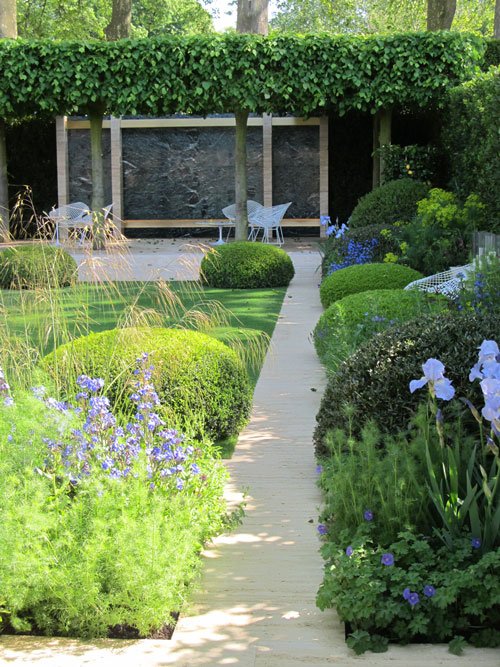 Another Italian-inspired garden, designed by Tommaso del Buono for The Telegraph. Enclosed on both sides by a bay hedge, it’s shaded at both ends by a canopy of 12 ‘roof trained’ lime trees. 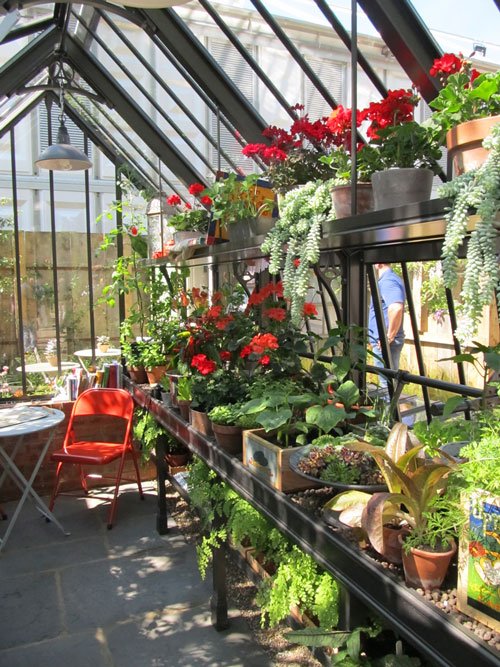 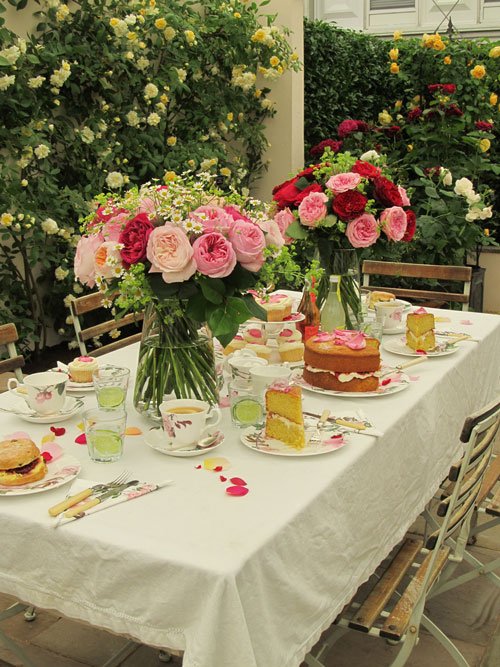 A table set for a very English cream tea on David Austin’s stand. 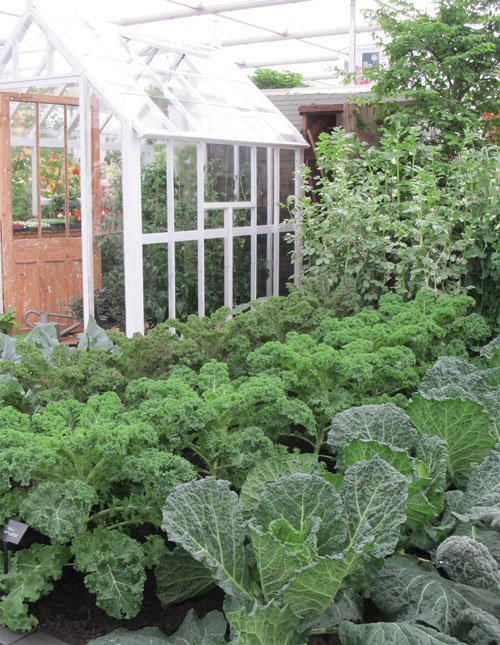 A wonderful display of cabbages on the Fifty Golden Years of Bloom in the South West stand. 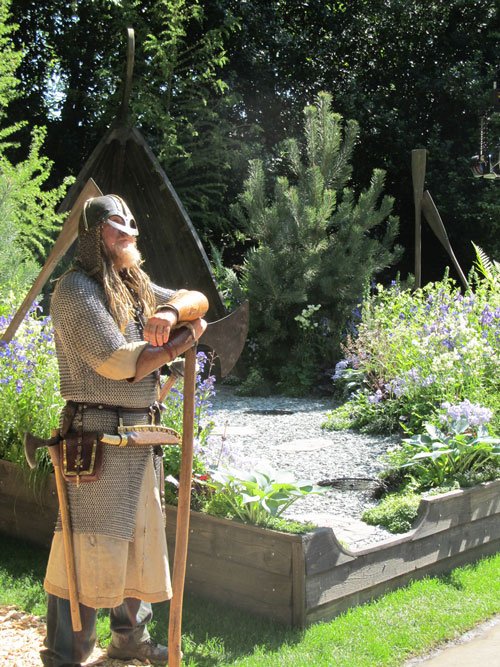 A Viking feels the heat in the Norse Garden, designed by Sadie May Stowell. 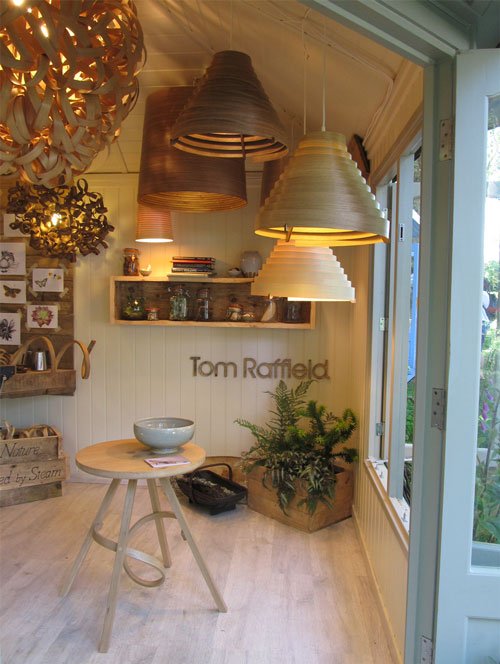 The Artisan Retreats are always a favourite of ours. The garden buildings are all supplied by The Malvern Collection, and come in many shapes and sizes. Inspired by the beauty and tranquility of his Cornish surroundings, Tom Raffield’s retreat (above and below) displays his contemporary lighting and steam-bent furniture. 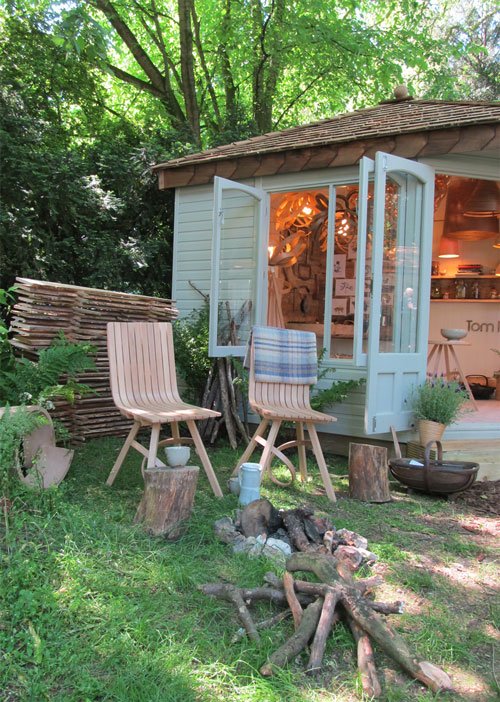 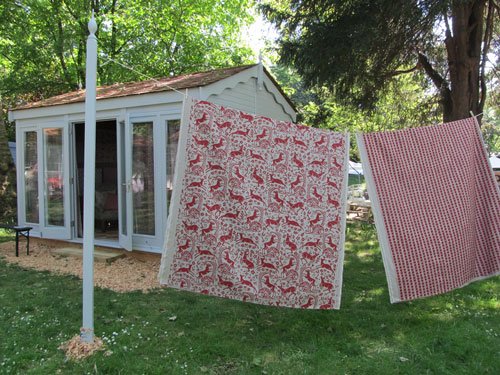 Fabric and wallpaper designer Lindsay Alker’s ‘Garden Studio’ (above and below) has been inspired by the Arts & Craft movement and the simplicity of Shaker interiors. 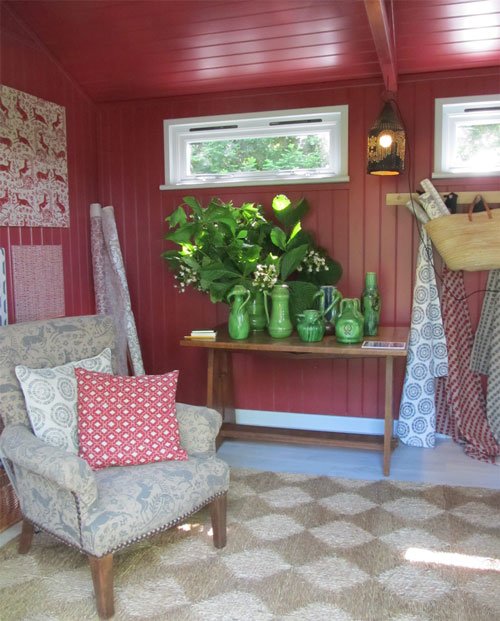 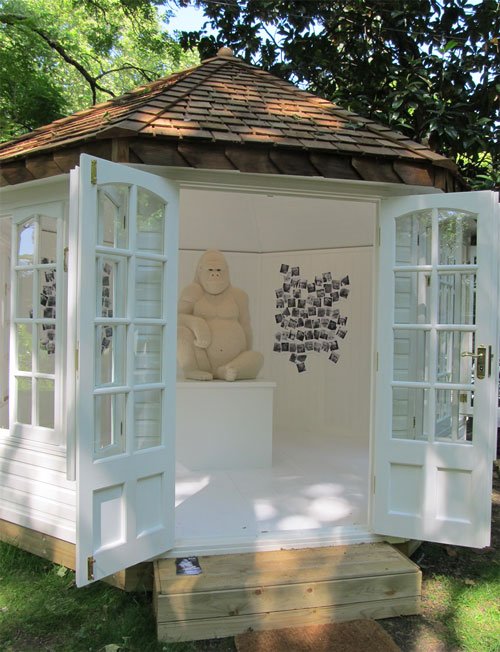 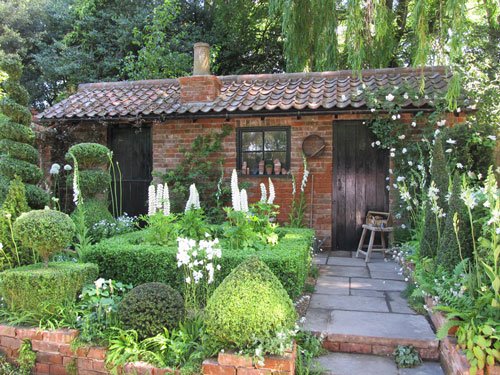 The Topiarist Garden was inspired by the remains of a historic bothy and courtyard garden at West Green House, home of Marylyn Abbott, garden designer and author. 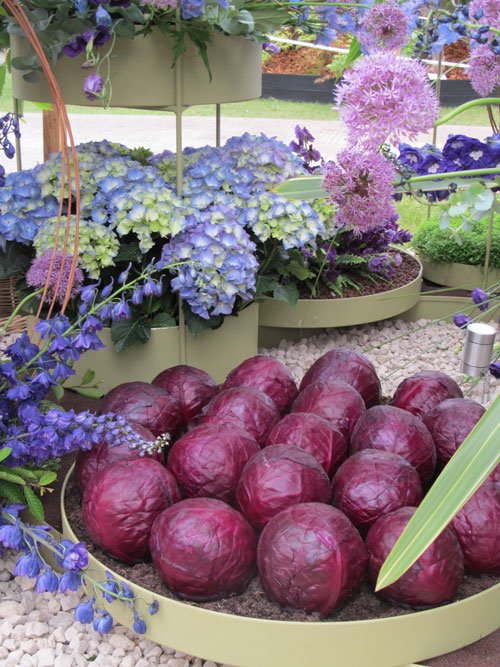 Hydrangeas, alliums and cabbages on the NFU & Waitrose stand in The Great Pavilion. 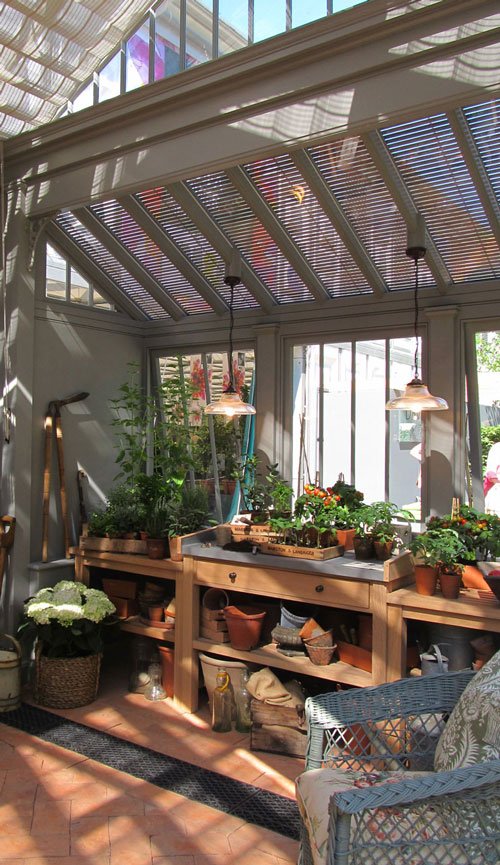 Marston & Langinger’s greenhouse, above, and Potager Garden, below. 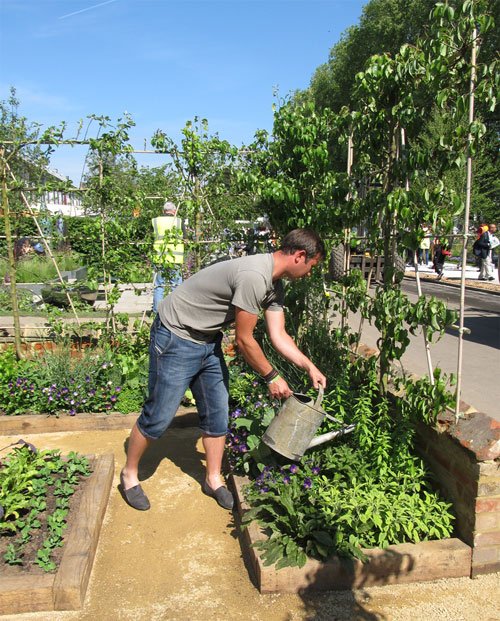 Find out more about the Chelsea Flower Show on the RHS website: www.rhs.or.uk/chelsea, and see who won this year’s coveted awards: http://www.rhs.org.uk/shows-events/rhs-chelsea-flower-show/awards